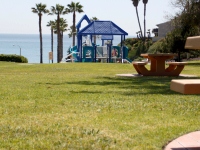 You are welcome to utilize the City’s parks from 6:00am to 10:00pm, without charge or reservation, on a first-come, first served basis unless a permit is required or a park area has been reserved. A permit is required for: all sport organization and club activities, any commercial use, activities that include more than 50 people, a wedding, or equipment such as a bounce house.

Courtney’s Sandcastle is an award-winning universal playground, which is part of the Vista Hermosa Sport Park in San Clemente, California. It serves children of all abilities, and is especially designed for children with physical, mental and sensory disabilities.

The San Clemente Junior Woman’s Club, Friends of the San Clemente Beaches, Parks & Recreation Foundation, and the City of San Clemente came together in 2002 to build a universally accessible playground especially designed to create an engaging, interactive play environment that allows children with mobility and sensory issues to play freely alongside their able-bodied peers. Courtney’s Sandcastle, with its Phase II sensory garden, promises to provide a whimsical place where all children (and parents) will enjoy playing together, regardless of their abilities.

This playground is named for Courtney Faye Smith, confined to a wheelchair by a rare muscular degenerative disease – Spinal Muscular Atrophy. When Courtney and her friends visit local parks together, Courtney is unable to participate because her disabilities don’t allow her to access all the play equipment, as are some 18,000 children in Orange County with disabilities. Play is not simply a desire for children – it is an absolute necessity for developing language, motor and social skills; interdependency; taking turns and meeting challenges; instilling a sense of self-determination and self-esteem; enhancing cerebral/motor development and learning to respect and accept diversity through play.

Courtney’s Sandcastle was designed by Richard Fisher Associates, a landscape architecture firm with over 30 years of experience, who has designed many premier parks and playgrounds in Southern California. Summers/Murphy & Partners completed the design and helped provide the framework for the Phase II Sensory Garden.

Phase I of the Courtney’s SandCastle universal playground opened on February 25, 2012. This phase includes:
• a Castle themed gateway into the playground complete with flags and stone walls and a Sand-like castle sculpture;